May 14, 2019
It was an eventful April meeting.  This month we were downstairs in the Rainbow Room!  It was definitely cozier than our usual venue.  Also, I had a bit of excitement trying to sort out audio-visual,   so my visuals this month are a bit less than I might like, so you'll have to use your imagination a bit more if you weren't able to be there!

I'd like to show you a picture of the absolutely fabulous quilt that Peter Byrne showed us this month.  It's not that I don't have one, it's just super top secret and under embargo, so if you didn't see it in person you're out of luck!  And believe me, it's amazing!  Maybe Peter will let me post a photo of it in the future!

Shirley Dawson (@shirlgirl55) showed up a great "Map your world" quild that she made for the Quilts at the Creek theme for 2019.  She's used echo quilting to good effect on this one.  I presume it will be in the exhibit, so if you want a closer look, I guess you'll have to attend Quilts at the Creek! 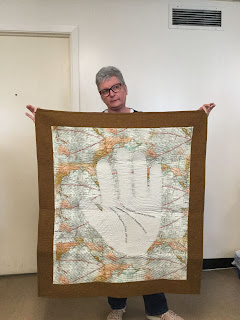 We had a cute mini from Julie Jai, that she called Beaded Sashiko--I love a good bit of sashiko, myself, and I love the bright colours! 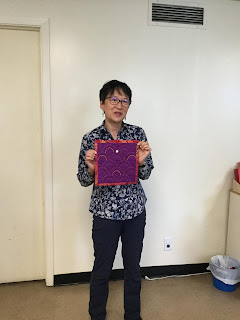 Catherine Clarke showed us a lovely quilt called Glitch, that she pattern tested for our own Bobbi!  I love the design, and the colours Catherine used are really effective. 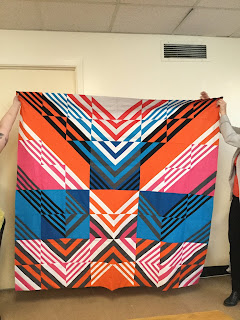 We also had Three Times a Charm from Kellie Murphy, which is one of her UFO's from 2018. And I'm hoping I've got the correct photo here, as I am not 100% sure! 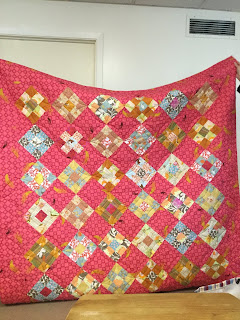 Finally, we had two offerings from Anna Figueira, Snowflake, which was an MTQG President's Challenge (Love Snow), and Junkfood, a charm pack project. 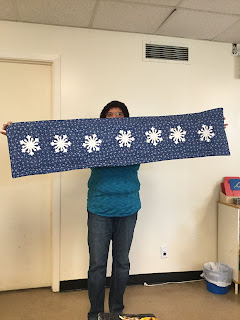 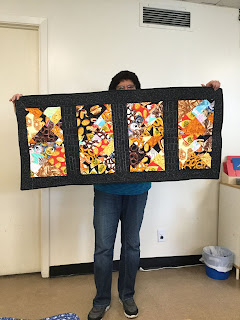 I think that was everyone, but if I missed you out-apologies!

Block Lotto
We have a new block lotto starting this month- six minute circles, which Rebecca demo'd for us, and handed out freezer paper for. 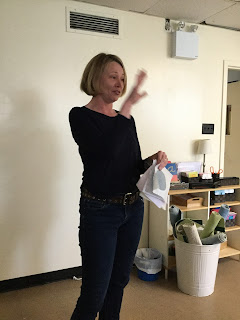 As usual, the instructions are up on the Projects and Challenges page.  The blocks are due in at June meeting, so get sewing away!

Snacks!
Wow!  Thanks to everyone who brought snacks for the meeting, we were totally spoiled for choice!

Machine Quilting
This month's main event was a discussion about machine quilting led by Bobbie. She started off by highlighting a number of different styles using examples from the recent QuiltCon.  A number of members asked for suggestions of what to do for quilting on some finished tops, which was lively and interesting: 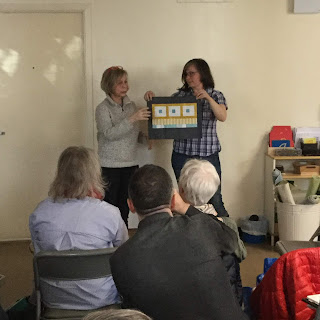 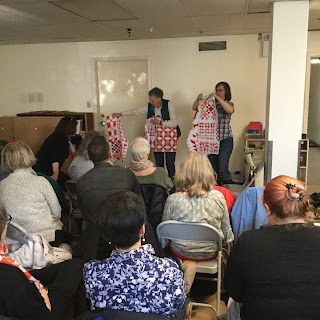 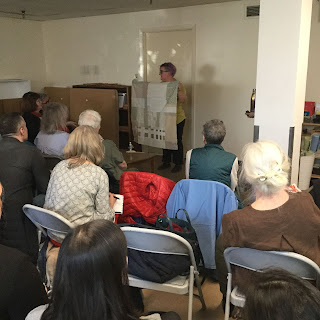 I think everyone really enjoyed it (I know I did!). Notes from the discussion are posted on the FB page under the Files tab at the left side if you want a recap, and if anything was covered that you think should be on there, we can add it in.

Spotlight-Instagrammers to follow
We had a fantastic spotlight from Theresa Ghislaine, who gave a great roundup of interesting and prolific posters on Instagram, including

She finished up with some tips and examples of tags, as well as a couple of websites where you can learn more, should you be so inclined!  You can see her slides here.

Prizes
The member draw was won by Gillian Leake
The paid raffle for the Workroom gift card, was Rebecca Burnett

All in all, it was a great and lively meeting, with lots to learn. That's it for April, see you at the next meeting!

May Meeting: Libs Elliott will be giving a trunk show and bringing a popup.

Popular posts from this blog

We know some of you were off at QuiltCon last weekend, but those of us who stayed home got our quilting fix at our fabulous February meeting.

We had a fantastic presentation from Tania Denyer of Ginger Quilts. She talked about the intersection of art and craft, shared her philosophy on creativity, and left us all asking "What would that look like in fabric?" Plus, we got to see her gorgeous and mouth-watering quilts up close. Inspirational!

AnnouncementsOur Vice President Xandra launched our very first block lotto of 2020! It features "Enchanted" the Kona Colour of the Year, and a block pattern from the Modern Quilt Guild. Block lotto instructions can be found here. Participate in our TMQG logo design challenge! Submit your designs to torontomodernquiltguild@gmail.com by March 29, 2020. You must be a member to enter the challenge. Multiple submissions are accepted.Sign up for the  Krista Hennebury workshops …
Post a Comment
Read more

Were you able to join us for our April virtual meeting? We had a great time, and maybe even learned a few things about modern quilting! Our guild remains active and our members seem to be keeping busy despite the difficult situation that we find ourselves in. Stay safe and stay well!  Announcements
Bobbie has launching this year's President's Challenge! It will feature the characteristics of modern quilting, and a modern colour palette. Click here to get more information and sign up to participate! The Maritime Modern Quilt Guild is doing a quilt drive for those affected by the tragic events in Nova Scotia, and our guild has stepped up to help provide some much needed comfort. If you are interested in contributing some blocks to this cause, email us for more information and to sign up to contribute. Do you have an area of expertise to share with the guild? Sign up to give a spotlight presentation at one of our upcoming meetings! Click here to sign up…
Post a Comment
Read more

July 01, 2019
Libs Elliott Trunk Show
We had a great meeting, even if it was a bit bright in the auditorium!  We had a fabulous trunk show from homegrown quilter Libs Elliott.

Libs shared the fascinating tale of her journey to quilting, pattern and fabric designing, as well as some interesting insights into her process of developing and using the mathematical algorithm that she used to aid her design process. Libs showed us this great vintage quilt while telling us about growing up with antiques all around her and the beginning of her fascination with quilts. Algorithm generated quilt!

The result of crowd generated quilt top. A cool hex quilt, a fascinating way of splitting up block shapes and fitting them together.  And a selection of some further quilts made with different designs and some of Libs' different fabric ranges.
Libs took some questions at the end of her talk, and we heard some interesting insights into the more economic aspects of the quilting business.
We had fun at the pop up …
Post a Comment
Read more